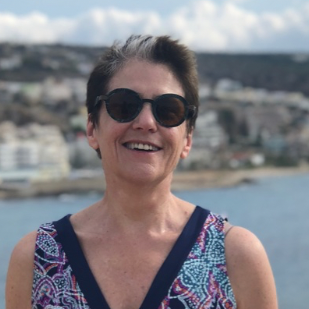 Lorie Loeb works at the intersection of design, technology and society. Her work focuses on presenting information in ways that create an emotional connection to data in order to increase impact and motivate people to change behavior. Lorie is a Professor in the Computer Science Department at Dartmouth College, Director of the Digital Arts Programs, Co-Founder/Faculty Director of the Dartmouth’s Digital Applied Learning and Innovation Lab (DALI), and Deputy Director for Design at the Center for Technology and Behavioral Health. The DALI Lab elevates learning through the transformative process of designing and building tools from concept through impact. Small teams of students solve big problems for partners from around the world. We approach our work with a spirit of creativity, whimsy and innovation that is inspired by Salvador Dali’s ability to transform the ordinary in to the extraordinary.

Lorie was awarded the National Undergraduate Mentor of the Year award by the NCWIT (National Center for Women and Information Technology) in 2015 and was named one of the 10 most inspiring faculty members at Dartmouth by the class of 2009.

Lorie is an artist as well as a technologist. Films she worked on won many awards, including two Emmy Awards and a Cine Golden Eagle Award. Her work has been screened at the Museum of Modern Art, the NY Film Festival, the London Film Festival and the Whitney Biennial. Lorie’s work has been funded by the National Science Foundation, the National Institute of Health, The National Space and Biomedical Research Institute, The New York Foundation for the Arts, Intel, Sony, Microsoft, and The Neukom Institute for Computational Science.