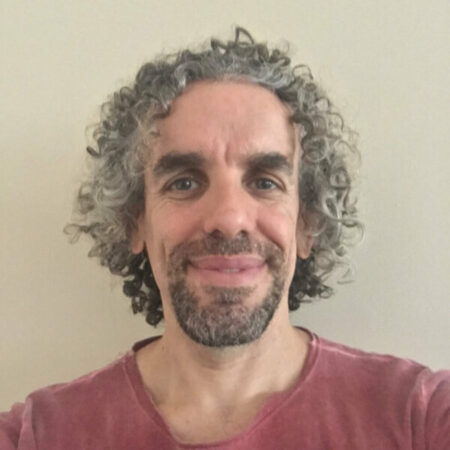 Marcelo’s life is dedicated to questioning pre-determined structures and practices of our current culture, finding out and engaging in experiences that provide a new way of living and then sharing this experience with a larger audience, that would otherwise dismiss them as too different or impossible. Marcelo currently lives with his partner and two children in Campinas near São Paulo, Brazil.

He is currently working on three interconnected systems: economics, marriage and parenting.

Economics: Marcelo is developing a software platform called Syntropy which will allow people and organizations to experience a distributed economy rather than a exchange economy. The platform is built on top of the Ethereum blockchain and allow people to understand and feel that the world is abundant, which means everyone is able to access whatever it needs whenever it needs. He is building Syntropy in order to live in a world where more people can wake up everyday and choose to share their talents instead of selling their time, while the network supports everyone to survive and thrive. One of the first projects which will use Syntropy is a global CO2 trading scheme that will only accept and offer carbon credits from agroforests.

Marriage: Marcelo is engaged in a first-person inquiry about his own marriage and with the support of authors such as bell hooks and Terry Real, he is writing and speaking with groups of couples. He is interested in how men keep supporting patriarchy without being aware of it.

Parenting: Marcelo is blessed to have encountered Hand in Hand Parenting when his two children were 4 and 2 and learned Parenting by Connection. He shares his parenting practices through a blog (in Portuguese) and through in person and online group meetings.

Marcelo’s past experiences include:

Creating a human development center in Piracaia which received dozens of people every month and provided processes for self awareness. He lived and worked there, planting, cooking, raising children and working as a community with another family.

Setting up a (failed) consultancy start-up to help small town mayors and their teams to integrate sustainability in their management practices while adopting a citizen centered approach to their public service offerings.

Working at Reos Partners with multi-stakeholder dialogue and complex systems changing processes. In 2010-2011 he was involved in the Civil Society 2023 Scenarios Project involving the Brazilian Government, Civiv Society Organizations and some big Corporations. On of the four scenarios described what is happening in Brazil over the last years, the impeachment of Dilma Roussef and the rise of an evangelical, authoritarian, populist president.

As a Managing Director of Serra Acima Marcelo helped this small non-profit in its mission to support family farmers who wanted to transition from a chemical based into an agro-ecological agricultural practice. After 2 years there were enough families involved and they were able to set up a peer certified organic market in Cunha.

Marcelo worked for ABN AMRO Bank helping to create and develop its sustainability capacity in their three main markets at the time: Brazil through Banco Real, in The Netherlands, and the US Midwest through LaSalle Bank. One of his major projects was the Social and Environmental Risk analysis of the largest oil and gas project at the time, Shell’s Sakhalin 2 Project in Russia.

Marcelo has a BA in Psychology and an MSc in Responsibility and Business Practice from the University of Bath, United Kingdom.

Produced as part of a creative expression session led by Jay Mead. Dedicated to Luna and Regiana.