Innovation in Montana: The First Generation of Mid-Scale Organic Farming 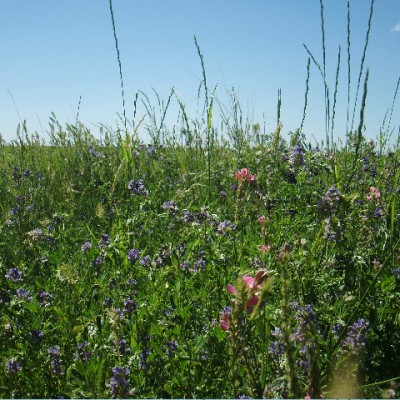 Fellow Anna Jones-Crabtree and her husband became first generation, mid-scale organic farmers when they started their dryland Vilicus Farms in rural Montana in 2009.

Vilicus is Latin for ‘steward of the land.’ The challenges have included severe climate change impacts, particularly drought, balancing full time jobs off the farm to ensure cash flow and standing for an organic farming system that doesn’t fit the mold of chemical-based financing.

Vilicus Farms’ story was possible because of United States Department of Agriculture’s Beginning Farmer and Rancher loan program and started with 1,280 acres in one of the most sparsely populated areas in the US.

Anna says that starting from scratch was daunting, but possible because their organic system required significantly less operating money. Additionally, because of the shortened supply chain in the organic sector, Vilicus Farms has established close relationships with their buyers and subsequently negotiated several variations of risk sharing contracts for their crops while taking advantage of the growing organic market. In 2014, the Organic Trade Association recognized the farm and Anna’s husband, Doug, with the Farmer of the Year Award.

Glimpsing into the future, Anna and Doug began an apprentice program and, in 2015, transitioned the program into Vilicus Training Institute (VTI), which has fiscal sponsorship through the National Center for Appropriate Technology. VTI is shifting into a farm incubator. They want to have succession options when they are ready to transition their farm. Anna and Doug don’t want others to have to wait until they are 40 to start farming and also want to have more neighbors. New organic farms are economic gains for rural America. Anna says that building new farmers is like building soil: “…it takes a long time and you don’t always know what is happening underground.”

The next chapter in Vilicus Farms’ story is unknown, but Anna and Doug do know that they will continue to advocate for systems change in US agriculture through policy makers in Washington DC and other channels. There is so much going on with local food and small-scale vegetable production that is moving in a positive direction, but organic agriculture at mid-scale has not yet been fully leveraged.